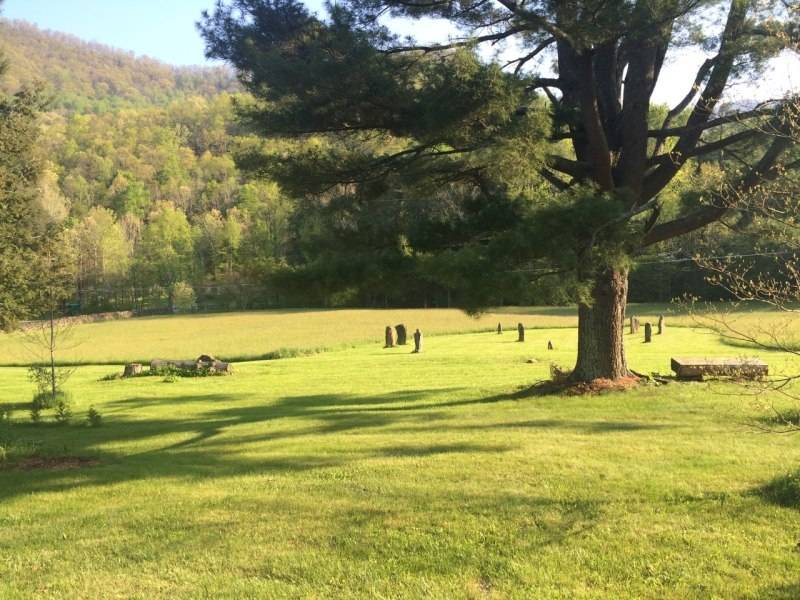 The Stone Circle at Boundary End

CIRCLES DEFINED BY STONES OR WOODEN POSTS set in the ground to indicate significant astronomical events such as the seasons are well known from the ancient world. The hundreds of surviving examples range from Britain’s famed Stonehenge to the remains of the “woodhenge” discovered at the great Mississippian site of Cahokia, east of St. Louis, in the United States, and include the wondrous megaliths of Callanish (or Callinish, or Callanais), Scotland, the ancient earthworks at Newark, Ohio, and others worldwide. These vary in size, date of construction, and apparent purpose according to their environmental setting and the alignments they contain.

Plan Events at the Stone Circle!

Enjoy a night of stargazing in the center of the circle with no light pollution to obscure your view. Located at the top of the meadow at Boundary End Farm it is the perfect location for a spiritual gathering of any kind. The following is a description of the stone circle written by its creator, George Stuart, our Dad, an archaeologist who called the farm home for years. Read about it below and imagine the possibilities.
Learn more in Dad’s article below.

There is a modern megalithic movement as well, led by enthusiasts in both Europe and North America. Among them, none are more active than Rob and Jaki Roy of West Chazy, New York. Among his many other activities and interests, Rob is the author of Stone Circles: A Guide to the Modern Megalithic Revolution, and editor of “Club Meg News,” the journal for the many who have been captivated by the subjects of stone circles and the motivations and meanings behind them.
The idea of erecting a stone circle at Boundary End came to us some six or seven years ago, inspired in part by Rob Roy, and also by the vista of our large north pasture against the backdrop of Pinnacle Mountain and the high forested ridges of the Pisgah National Forest.
Based on Rob’s book, which led us to the work of Alexander Thom of Oxford University and others, we gradually formed a plan. The first task was to determine an appropriate unit of measure. For this we settled for the “megalithic yard” of 2.72 feet proposed by Thom and others, based on measurements at hundreds of ancient sites in northern Europe.
The basis of the circle, we decided, would be a center stone located in a relatively level area where sunlight would reach during the better part of most days in all seasons. Such an area lay several hundred feet from our house and the nearby log cabin, which serves as a retreat. For the precise site of this center stone we chose the point where the short central axis of the house and that of the cabin met. This would guarantee excellent views from both buildings.
From this center point, a circle with a radius of 27.2 (ten megalithic yards), or a diameter of 54.4 feet (20 megalithic yards), was set out. Upon this circumference upright stones would be set so that at sunrise and sunset on the solstices and the equinoxes and on other key days of the year their shadows would point directly toward the center stone. An additional stone would be set in alignment with the center stone to mark true north and, perhaps, a smaller one to indicate magnetic north.
Our environment presented one major problem. There is no true horizon at Boundary End, only high mountain ridges in every direction. Thus, all sunsets and sunrise shadow alignments had to be set by visual observation on the key calendar stations. This was done every year on (or, if cloud cover interfered) within a day or so of the solstices and equinoxes, etc. We established the “true north” line on a suitable sunny day (and any day will do) based on the shadow of a true vertical pole at “solar noon,” the instant of the sun’s daily zenith.
Our preparatory work began to come to fruition in the early fall of 2003 when a crew of archaeology students from Warren Wilson College under the supervision of Professor David Moore hefted the first stone, the all-important center of the circle, into place. As part of the learning process, the students used no tool invented after about 2500 BCE to set the stones, only logs, ropes, lever poles, and digging tools of deer scapulas (although the rocky soil made us occasionally relax the rule in favor of steel shovels!)
A most interesting aspect of this project is the hierarchical evolution of the work crew itself: In the beginning, the crew appears as a random group of individuals. By the time the stone is selected from the many on the landscape and moved and set into position on the circle, a process that usually takes several hours, the crew has shaped itself into those who lead, those who follow, and those who tend mainly to provide moral support.
At the time of this writing, the early autumn of 2009, six stones are in place with perhaps that many more to go into position during the coming years. The next stone placements, those for the equinox sunsets and sunrises–and luckily these are the same two points on nearly opposite sides of the circle–will take place this on November 6, 2010.