Welcome/Bienvenidos to Mexican Archaeology: The Life and Times of Richard Gomez

By Richard A. Diehl

Please join me in my new blog, Mexican Archaeology: The Life and Times of Richard Gomez. Future episodes will recount the adventures, misadventures, and lessons learned by a young college student who found himself in Mexico’s Teotihuacan valley in June, 1961. He thought it would be a summer lark; it turned out to be the first step in a career. Future blog episodes will relate memorable events and mishaps in that career. The foci will include ancient and modern Mexico, recent finds in archaeology, what the past can tell us about the present and the future, and anything else I think is worth sharing.

Diehl as a freshly-minted college graduate in 1962. Still fairly wet behind the ears in the ways of the world but learning.

My first order of business is to clarify the two blog contributors; Richard A. Diehl and Richard Gomez. Diehl is a living, flesh and blood person and the blog is created on his computer. Gomez is a fictional character who has always flown the Jolly Rodger and emerges from the shadows from time to time when Diehl’s mind goes into fantasy mode. Bear with me and all will become apparent.

About Richard A. Diehl

Richard A. Diehl is an anthropological archaeologist who has lived and conducted research in Mesoamerica since 1961. A graduate of Pennsylvania State University (BS majoring in history 1961, MS in Anthropology 1965, PhD in Anthropology 1969), he studied under William T. Sanders and Paul T. Baker while also being mentored by Michael D. Coe of Yale University. During his student days, he conducted research in Mexico’s Teotihuacan valley, (1961-1964) and Olmec center of San Lorenzo Tenochtitlan, Veracruz (1966-1967).

Diehl as a student in Mexico, summer, 1961. His professor and life-long mentor and friend William T. Sanders is trying to teach him how to make a map. That is when he realized it would always be better to let his students do the mapping.

Diehl as a Museum Director in 1999, wearing his Academic Administrator Camouflage. A blazer and a necktie can make any man appear to be respectable and trustworthy.

He loves to travel and experience other cultures and peoples. He has lived 60+ months in Mexico and 6 in Big Sky, Montana, with three-month stays in Guatemala City and London. His four multi-week visits to Spain, two three-week stays in Japan and six weeks in the Peruvian Amazon round out the pleasures he reflects on while sitting by the Franklin stove on cold winter evenings. His greatest pleasure comes from being a father to his son Richard Jr., numerous step-children, and an unruly passel of grandchildren.

COVID-19 has seriously cramped his freedom as he enters his eightieth year spinning around the sun. However, he and his wife Nancy are fortunate to be installed at Boundary End Archaeological Research Center, Barnardsville, North Carolina, where he serves as volunteer Director of Operations. BEARC is located in the mountains at the end of the paved road and the foot of Pisgah National Forest; a great place to self-quarantine while engaging in interesting and important work, to say nothing of enjoying morning coffee and evening wine on the porch

As mentioned earlier, Richard Gomez is a fictional character. He played a minor part in a debate that occurred long ago in a distant galaxy called the Barba Negra, a downtown Mexico City Centro Nocturno (house of ill repute). The debate concerned a crucial question in the study of human history. Did human civilization evolve as a response to primarily economic factors, or did great men and women, beliefs, ideology, aesthetics, and other elements play leading roles in creating our modern world? The debate remains unsettled today. The setting was typical of places archaeologists gravitate to when they get to the big city. In truth, the setting could have been anywhere. Alcohol is inevitably a basic ingredient in all such weighty endeavors although shady ladies are not. Archaeologists of all genders can be trusted to know (and be known at) every cantina, beer joint, and pub within a 10-mile radius. Some establishments live on in folklore long after their doors have closed. One North Dakota shit-kicker bar that may or may not still be in business is world-famous in archaeological circles because it started out as a primary school. The new owners never got around to renovating the rest rooms so the urinals in the men’s room are still at a height appropriate for boys ages 5-8. I have no idea what the ladies room looks like. Ask Dr. ML, the Horseback Schoolmarm from Montana.

Another in Veracruz City, Veracruz, Mexico, was named La Escondida (The Hidden). It became so well known that the locals called it La Encontrada (The Found). As documented by Kent V. Flannery, La Escondida is famous for the altar in the patio featuring a statue of the Virgen de Guadalupe and a plaque that read “Virgencita, quien concebiste sin pecar, ayudenos pecar sin concebir” (Dear Virgin Mary, you who conceived without sin, help us sin without conceiving”. 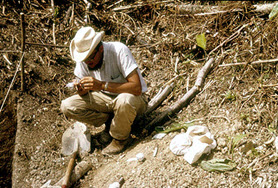 Gomez excavating at the Olmec site of San Lorenzo in 1966. He is attempting to untie a knot in a string around a bag of potsherds after realizing that he failed to insert the identification tag.

Richard Gomez came into existence when Flannery was editing The Early Mesoamerican Village (1976, Academic Press), a classic in Mesoamerican literature. He enlivened each section of the book with vignettes involving both fictional and real characters. He asked Diehl if he could use his real name in the Barba Negra account. While honored, Diehl was also trying to save a marriage already heading for divorce. He turned down Professor Flannery’s offer, a decision he has never regretted.

In later years, Diehl created a Richard Gomez re-enactor persona who would occasionally show up in his classes doing what were intended to be comic-serious routines as the Harrison Ford Professor of Archaeology at Lowrider University in East Los Angeles. Complete with a battered sombrero and a brightly colored but faded Mexican moral (shopping bag) filled with a half-empty tequila bottle, several church keys, a pack of condoms, a few moldy tacos, several rolls of toilet paper, and a broken trowel, he attempted to give students a taste of what Mexican archaeology is REALLY like. Sometimes he succeeded, sometimes not. 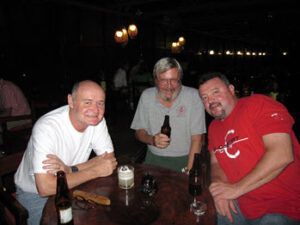 Gomez enjoying a few beers with his son Rich, right, and Professor Larry Davenport of Samford University, in a jungle honky-tonk near Iquitos, Peru

Today Gomez is a largely-forgotten figure in the history of Mexican archaeology who occasionally returns to Diehl while staring at the fire. Since Gomez refuses to leave him in peace, Diehl has assigned him an important role in this blog. He will become a time traveler who visits ancient Mesoamerican villages, cities, milpas (farm fields), workshops, quarries and mines, brothels and battlefields. His charge is to report to blog readers what is actually happening on the ground as he observes ancient daily life without being observed, the things that archaeologist can guess at but never definitely prove.
I hope you will join both of us as we ramble on our way to either Mictlan, the Aztec Abode of the Dead, or Xibalba, the Maya Underworld.

Next Article – Mexican Archaeology: The Life and Times of Richard Gomez